You all know photographer Dorothea Lange. If not Dorothea herself, you’ll recognize her famous candid photos taken during the 1930s highlighting the struggles of Americans suffering during the Great Depression. Her iconic Migrant Mother and the series of photos around that image depict the desperation many felt during the period.

Later in 1942, she was hired by the US government to capture images of the relocation of Japanese-Americans affected by President Roosevelt’s Executive Order 9066. Thousands of American citizens were being stripped of their civil liberties, their businesses, and their homes before being placed in internment camps scattered around the country.

Lange was originally opposed to the idea but accepted the task because she thought “a true record of the evacuation would be valuable in the future.” But after reviewing her photographs and their portrayal of the Japanese American experience, the military became concerned how the images of the internment program would be received by the public.

So government leaders seized the photos for the duration of World War II and deposited them in the National Archives, making them unavailable for viewing. Not until 2006 were the censored pictures finally released.

This week is the 75th anniversary of Roosevelt’s February 1942 decision to sign an executive order creating restricted areas and sending over 120,000 people to internment camps.

Lange’s photographs and other documents from the period provide a powerful tool for training students to think historically and to connect past events with contemporary issues. Ansel Adams and other photographers also documented the internment process. Many of the photos taken by Lange and Adams are now available online as well as articles and resources that can be used to create engaging and powerful learning activities.

Browse a variety of resources telling the story: 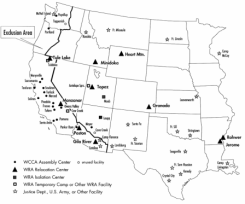 Get updates via email

Doing Social Studies is maintained by members of the Kansas Council for the Social Studies. It's a place for a variety of voices to discuss what high-quality social studies looks like in the 21st century. KCSS board members and other educators from around the state share ideas, resources, and materials about how we can all do social studies better.

Doing Social Studies replaces the Sunflower Social Studies newsletter and allows us to provide information in a timely and efficient manner all year long. We'd love for you to join the conversation by leaving your own ideas and suggestions in the comments.

Be sure to visit the Kansas Council for the Social Studies site for resources, membership info, and professional learning opportunities.